Ocasio-Cortez, Shapiro, and Arguers as Lovers

Not surprisingly, Ocasio-Cortez's victory sent the right wing into a frenzy. Sean Hannity calls her platform "downright scary." During his anti-Ocasio-Cortez rant, Hannity put on the screen her policies that are supposed to make us scared:
Wow, health care for everyone? I'm trembling. Support seniors? Frightening--I suppose we should just abandon them. Curb Wall St. gambling? Pure terror--let's just allow rich assholes to screw everyone. Seriously, we can and should have lively debates about the American democratic socialist platform, but to call it "scary?" In credible public opinion polls, almost everything on that platform has majority support among the population at-large (Medicare for All has the support of 70 percent of Americans), which is why Berniecrats have been doing well in elections across the country (Tallahassee Mayor Andrew Gillum's victory in the Democratic primary for governor of Florida was even more stunning than Ocasio-Cortez's).

The ascendance of progressive candidates like Ocasio-Cortez and Gillum does provide a golden opportunity--that will probably be missed--to have meaningful, civil argument over competing visions for the country's future. We've never really been good at public argument in the United States, but over the last 30 years a toxic mix of cable television idiocy and political tribes trapped in Internet echo chambers has pretty much eliminated even the possibility of such argument.

Last year in a Media Rant I blamed some of this pathetic state of affairs on the "eristic revival" championed by the late Fox News boss Roger Ailes. For the ancient Greeks the eristic was an "intoxicating" mode of argument rooted not in the civil exchange of ideas for the purpose of arriving at sound public policy, but in the desire to defeat and humiliate opponents. Actually if you watch any cable TV talking head panel on the Fox "right" or on the MSNBC "left," the participants (who comedian Michelle Wolf aptly refers to as the people who remind you why you hate to go home for Thanksgiving), really do seem intoxicated. They have the kind of "passion" you find in tavern arguments at midnight over politics, sex, or religion: half-baked ideas, trashing people not there to defend themselves, angry self-righteousness, glib stupidity, and often yelling for no good reason. At least after  a tavern clash a drunken fool might sober up the next day and apologize for his obnoxious behavior. On cable TV, not only is there no apology, but the fool keeps getting invited back for more!
When pundits who operate in the cable TV/Internet echo chamber framework challenge someone to a debate, the purpose is never to create a space for greater understanding of an issue. Instead, the purpose is to get the opponent on video opposite the pundit. Then, no matter what the opponent says, his or her comments will be digitally spliced and placed on echo chamber social media and other websites, where the comments will be characterized as the opponent being "owned," "trashed," or "put in her place" by the pundit. Go to YouTube and you can find literally thousands of clips of "debates" that have been cut and spliced in ways that make the debate participants appear to be saying whatever the cutter and splicer wanted them to say.

From the perspective I've put forth here, Ocasio-Cortez's rejection of an offer to "debate" right wing pundit Ben Shapiro makes complete sense. Mr. Shapiro, former editor of Breitbart News and now editor-in-chief of the Daily Wire, is probably best known for his attacks on the alleged political correctness dominating universities. He's a frequent guest on Fox News, but has also been on CNN, Bill Maher, and other mainstream programs. It also turns out that Shapiro, like Alex Jones and other firebrands on the right, actually uses his program to market dietary supplements.

After Ocasio-Cortez's primary victory, Shapiro joined the cable TV chorus, trashing her with  Hannity-like hyperbole. He then challenged her to a debate, even offering to pay $10,000 to her campaign if she would participate. Ocasio-Cortez likened the offer to catcalling. She tweeted: "Just like catcalling, I don't owe a response to unsolicited requests from men with bad intentions. And also like catcalling, for some reason they feel entitled to one." 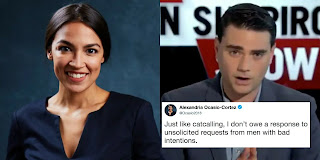 Do a search of videos featuring Mr. Shapiro, and you will find that Ocasio-Cortez's claim of "bad intentions" is not entirely unfounded. As I suggested earlier, if Ocasio-Cortez were to take the stage with Shapiro, it would not matter what she actually says. Instead, her comments would be blown up, taken out of context, cut, spliced, and labeled in a manner to reinforce the right's pre-existing view that she's a dangerous radical whose ideas were "demolished" by Shapiro. Such a debate would add very little to our understanding of public policy issues, in large part because the echo chamber surrounding Shapiro really has no interest in understanding. Understanding public policy is hard and does not generate tons of clicks. But the eristic battle--"demolishing," "putting in place," "owning"--because it has more in common with Hulk Hogan v. the Rock than it does with Lincoln v. Douglas, is what a Shapiro requested "debate" becomes.

How do we get out of this mess? We need to rethink "argument." A good starting point is a classic essay from my field of Rhetorical Studies, published in 1972 by professor Wayne Brockriede. The essay, titled "Arguers as Lovers," was itself a response to the dysfunctional argument culture of the late 1960s and early 1970s, a time when public debate was moving toward the war-like quality that ultimately became the norm with cable TV and the Internet.

Brockriede presented three stances that arguers can take in relation to other arguers: the arguer as rapist, the arguer as seducer, and the arguer as lover. (Professor Robert Gass presents the stances as "abuser," "manipulator," and "equal").
Much of what we call public argument today features what Brockriede called the rapist or seducer stances. In those argument stances, the arguer's opponent is not a person as much as an object. Verbal aggressiveness, trickery, willfully distorting information, and other linguistic control mechanisms are all part of the rape and/or seduction framework. These argument metaphors are, sadly, almost perfect descriptors of what's happened to public argument in the social media age. Hyper-partisans on the right and left now argue almost exclusively within the bounds of the rape/seduction stances, though what's called "conservatism" today is the worse offender (as former Dean of Wisconsin right wing radio Charlie Sykes puts it, modern conservatism is now little more than trolling of liberals. Trolling is similar in form and impact to what Brockriede called the rape stance.).

Brockriede preferred a higher standard for arguers, what he called the arguer as "lover." The arguer as lover sees his or her opponent as an equal. For arguers as lovers, creating and maintaining a relationship between the opponents is as important as the outcome of the argument contest. In fact, arguers as lovers do not even see themselves as "opponents" as much as equal partners participating in problem solving. And very critically, in argument as love each participant starts off with the assumption that he or she CAN BE WRONG and might have to CHANGE HIS/HER MIND in the presence of an argument supported with compelling evidence.

Is it too naive to think that we could actually move toward an arguers as lovers model in the United States? It is true that the odds of argument as love happening on cable TV or the Internet are remote. The Ben Shapiros of the world, and others on the right and left performing more severe or milder forms of verbal rape/seduction, are lost causes. The best we can do as regards those folks is make sure our children learn how to do media criticism at the earliest possible age, so they can recognize all the attempts made to objectify them and make them easy prey for clickbait provocateurs.

On the other hand, there is evidence that Americans at the street level, in their own communities, are practicing argument as love. A recent article by Idaho based writer Gracy Olmstead in the New York Times on the movement toward "localism" showed how seeking community with those who live closest to us might be an antidote for the nastiness as the national level. Olmstead I think is spot on here:

If citizens turn off cable news and instead step outside their front doors, seeking to care for their communities, they may help fight back some of the anger that has fractured our politics. For those who volunteer together at a local soup kitchen, homeless shelter, Rotary Club or Boy Scout troop, national battles matter much less than local, tangible needs.

Rediscovering our communal identities will require unplugging from our devices and returning to the local institutions that used to facilitate a “center,” like school boards, church soup kitchens, town hall meetings and libraries. Disappearing bipartisanship may be rediscovered, as the journalist Sarah Smarsh puts it, “in direct communion, sharing a mission.”

Localism is not a perfect cure for national division, and cannot serve as a full replacement for national politics in a globalized era. But at a time in which many Americans feel disenfranchised, disillusioned and defenseless, its empowerment may act as a sort of balm.

Debate is a vital part of a healthy, functioning democratic culture. But debate that's rooted in rape/seduction argument stances and eristic displays that generate web clicks is actually more harmful to democracy. If we're going to see change at the national level, we have to first change the way we argue among ourselves in our communities. There are some hopeful signs on that front, but each of us needs to pledge to do more and be better.
Posted by tony palmeri at 6:00 PM No comments: