Less than a year ago, the dominant corporate media narrative regarding presidential campaign 2016 predicted the inevitable coronation of Jeb Bush and Hillary Clinton as the nominees of their respective parties. Back then, the major challenger to Jeb was supposed to be our own Scott Walker, and few in the establishment thought that Bernie Sanders would last until the Wisconsin primary (let alone win it).

Because the voters elected not to cooperate with the establishment narrative, Wisconsin’s April 5th primary took on an added significance. The national media gave much attention to our state, and for the first time in months people across the country associated Wisconsin with more than just Making a Murderer, beer and cheese, and the Green Bay Packers.

Here are some takeaways from what will go down as one of Wisconsin’s more memorable primary years.

Reince and Beans: The Chair of the Republican National Committee, Reince Priebus, is a Wisconsin guy and big Scott Walker fan. Reince and the RNC created a 2016 primary calendar tailor made for Walker: they front-loaded the calendar with deep red states that should have been open to the Wisconsin governor’s brand of conservatism, and they made sure Wisconsin was the only state to vote on April 5th, something blatantly designed to give Walker a national platform six months before the general election. As it turned out, Reince’s maneuvering wasn’t worth a hill of beans. Donald Trump and Ted Cruz outflanked Walker on the right wing, stealing all of the attention and votes in the red states; Walker’s campaign ended barely 70 days in. A primary process designed to pacify the Koch Brothers and other big donors while quelling dissent within the party ends up on a path toward the most fractious nominating convention in GOP history.

Dems Felt The Bern, But Not The Burg: Bernie Sanders’ campaign is rooted in the idea that social change only comes about through the power of grassroots movements. In fact when challenged as to how he will get anything done as president, Sanders insists that millions of people will come to Washington and pressure the congress, whose members will have no choice but to succumb to the “political revolution” staring them in the face.

Wisconsin gave Sanders a great chance to put the revolutionary strategy into practice. Would he be able to get his energetic supporters to turn out for state Supreme Court candidate Joanne Kloppenburg, the progressive challenger to Rebecca Bradley, the right wing judge appointed to the court by Scott Walker? As it turned out, no. True, Kloppenburg was outspent and was the victim of some nasty special interest advertising, but the disturbing fact remains that thousands of people who voted for Sanders (or Clinton) did not vote in the supreme court race. You’d think that advocates for a political revolution, if they intend to be anything more than human campaign slogans, would be able to educate voters about the consequences of “undervoting.”

Right Wing Talk Radio and Civility: Given his national appeal to alienated, low income white voters with less formal education, Donald Trump should have done well in Wisconsin. At the national level, Trump’s campaign has been boosted among such voters by right wing radio icon Rush Limbaugh and his mini-mees like Sean Hannity. In Wisconsin however, right wing radio turned against Trump (who in their alternative universe is somehow “liberal” compared to other GOP candidates).

Right wing radio in Wisconsin is led by Republican hosts comfortable with the GOP establishment and big donors for whom Trump has displayed mostly contempt. These hosts called out Trump for his lack of civility, the irony and hypocrisy of which was somehow lost on the national media. Trump is an obnoxious bore, it is true, but right wing radio in Wisconsin is about as a civil as a hungry piranha fish. They make their living off of demonizing liberals, union members, and anyone else who opposes their agenda.

Voter ID Will Serve Its Purpose: On the evening of the primary, our own Congressman Glenn Grothman argued that Ted Cruz or Donald Trump could be the first Republican to win Wisconsin in a general election since 1984 because "Hillary Clinton is one of the weakest candidates they ever put up, and now we have photo ID, and I think photo ID is gonna make a little bit of a difference as well." This means that Grothman believes every Democrat who’s won Wisconsin since 1988 benefited from voter fraud; if he does believe that he should be calling for congressional hearings. Or, and more likely, he believes that voter ID will suppress Democratic votes just enough to allow the GOP to prevail in a close election. Some are angry at Rep. Grothman for his comments, but he probably should be thanked for confirming what voter ID opponents have suspected for years: the law is not about fraud (of which there is negligible evidence in Wisconsin), but about helping Republicans maintain power.

Missed Opportunities: The national media staked out in Wisconsin for two solid weeks before the election. That should have been a great opportunity to get candidates to go on the record about critical issues facing the state. Instead we heard mostly talking points culled from stump speeches, with little Wisconsin focus. What a shame. 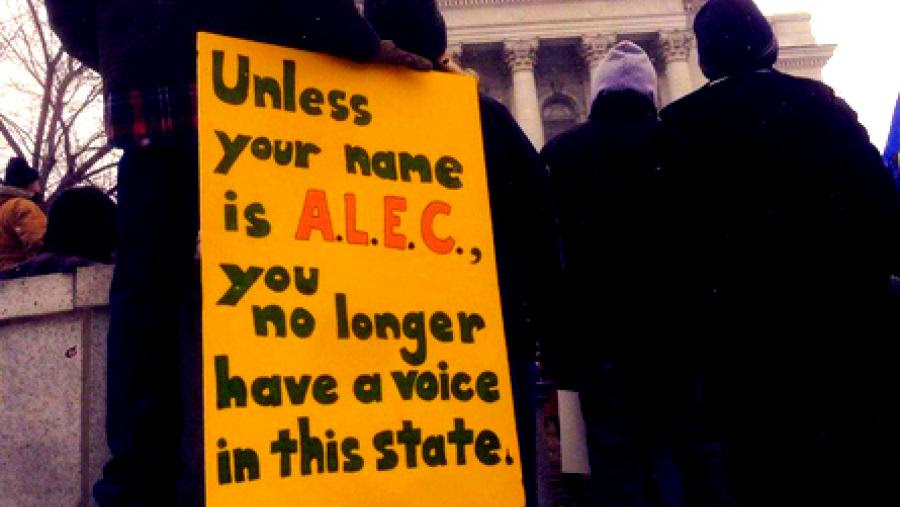 Posted by tony palmeri at 3:52 PM No comments: