From the June 2015 edition of The SCENE

My dear mom Gertrude “Trudy” Palmeri passed away on May 11, 2015 at the age of 79. She and my Korean War vet dad Frank would have been married 60 years (!) in October. All but the last two years of her life were lived in the borough of Brooklyn, NY. She was an Italian-Catholic  Brooklynite in the most honorable sense:  heart as big as the borough, fiercely protective of her immediate family, charmingly blunt and witty, and proud of her accent. Oh how I will miss the accent that typically left me feeling nostalgic during our phone conversations; conversations that always started with “yeah Ant, howya doin?” and ended with “alright I’ll letcha’  go, Love you.” (I don’t think my mom ever called me Tony. It was “Ant” from day one.). 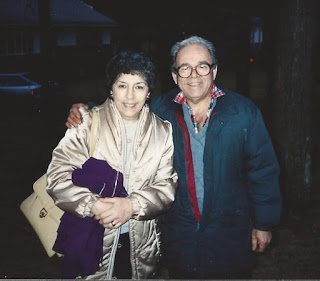 Trudy Palmeri was not an activist in the traditional sense. She did not organize or otherwise participate in rallies, she did not lobby public officials (though she rarely missed voting in elections), and she did not make her political views widely known. And yet there was something remarkably motivational about her. I think it had much to do with the fact that she would much rather “walk the walk” when it came to some core values that the so-called activists love to TALK about. So for example, for Trudy Palmeri “family values” was more than a bullet point in a Madison Ave. set of talking points constructed for some political phony. For Trudy, family values were a lifestyle of unconditional love for those closest to her. Family values meant being there in body and spirit during the good times and bad, always ready to lend helping hands and supportive hugs. My two brothers and I became respectable members of society by having the good fortune of being in the daily presence of a role model of human decency. The world might be a kinder, more loving place if everyone had the benefit of being raised by someone who walks that walk.

If you think about it, a child’s parents are in a real sense the first “media” that she or he is exposed to. Scholars traditionally think of mass media as serving four major functions: communicating news, encouraging us to interpret the news in a certain way, communicating lifestyle values, and entertainment. Parents do all of that in ways that leave long lasting impressions on their children.
Without exaggeration, I’d say that pretty much every value that has guided my life is a direct result of being raised in my parents’ “Palmeri Today” show, which ran 24/7 growing up. Every day on that show the “news” featured acts of gratitude, caregiving, and patience, with an overarching sense of love controlling the scene. When I think of why I ultimately became a teacher, I’m sure it had everything to do with exposure to the Palmeri Today show values. Mom especially went out of her way to keep her own ego in check so as to be in a better position to recognize the accomplishments of others, an approach toward life that all teachers reading this will recognize as key to success in our profession.

Here’s an example of how she walked that walk: It was the 4th of July 1983, and young Dave Righetti of the New York Yankees was pitching against the hated Boston Red Sox on an extremely hot 90-plus degree day at Yankee Stadium.  Righetti no-hit the Sox that day, striking out the great Wade Boggs to end the game. A no-hitter had not been pitched at Yankee Stadium since Don Larsen hurled a perfect game in the 1956 World Series.  The next day I got home from my summer bank teller job and saw mom at the dining room table writing a letter. On the table was the New York Daily News with Righetti on the cover and “A no-Hit Fourth” headline. Mom explained that she was writing Dave Righetti to congratulate him. I remember we had a conversation that went something like this:

Me: “Mom, I know it was exciting and all, but it’s just a game. He probably won’t see your letter anyway.”

Mom: (sounding disappointed in my attitude). “No Ant, not just a game. That’s a no-hitter. That’s big. And Righetti is Italian!”

Years later she laughed and sounded pleased when I informed her that Dave Righetti was inducted into the National Italian-American Sports Hall of Fame.

In my teaching career I’ve always made it a point to write students brief notes of appreciation when they do something above and beyond required expectations. Each time I’ve done it I’ve had the vision of mom writing that letter to Dave Righetti.

In August of 1983 I left New York to go to graduate school. Mom cried like a baby the day I left; she said that what really got the tears flowing was a trinket a friend had given me that said “teacher.” She comforted herself with the belief that I would impress the teachers at Central Michigan University.
On May 11 I cried like a baby when mom left. I experience comfort from the belief that when she met the greatest teacher of all in the afterlife, S/HE gave Trudy Palmeri an A+ for a life well lived.
Posted by tony palmeri at 12:02 PM No comments: