from the April 2015 edition of The SCENE

Democracy activist Mike McCabe, former Executive Director of the Wisconsin Democracy Campaign and author of the reform manifesto Blue Jeans in High Places, will speak at the University of Wisconsin Oshkosh on April 9 at 7:30 p.m. in Reeve Union 306. Attendance is free and open to all. If you are interested in what’s ailing our democracy and what we can do to cure it, you owe it to yourself to attend!

In anticipation of Mike’s visit, I asked him to respond to a few questions.

Media Rants: Blue Jeans in High Places is relatively silent on the role of mainstream media in helping to create the civic crisis described in the book. What has been the media’s role in that crisis?

McCabe: The role has been huge. Chapter 12 focuses on how the changing media landscape has contributed mightily to the decline of our democracy’s health. Of course, the whole book – or a great many books – could be devoted to this topic. There are other parts of the book that don’t appear to be addressing the media, but describe how politics has changed because of the way news organizations have changed. Like how Bill Proxmire used to be able to run successfully for statewide office while

spending less than $300 on each of his campaigns at a time when newspapers were king, and how we now see $80 million spent on statewide races for governor once television replaced newspapers as the place where most people get most of their information about government, elections and candidates running for office. TV also has changed the way politicians talk. They now have to speak in soundbites. They have to be glib, and they think they all have to be blow-dried and made up to look like TV anchors. Substance is sacrificed. I write about how more truth is found on “fake news” on Comedy Central than is found on the “real” news provided by the cable news networks. That’s a sad commentary on the state of the media.

Media Rants: Are there particular Wisconsin news sources and/or journalists that you rely on to find out what’s “really going on” in our state? Who/what should active citizens be reading?

McCabe: I don’t put my eggs in one basket, or even in a few baskets. I believe in reliance on a very wide variety of news sources. I don’t completely trust any single news source. I still subscribe to a daily newspaper, and glean news from the websites of many other newspapers. I am an avid public radio listener. I get a lot of news online, from a large number of sources. I occasionally listen to commercial talk radio, but generally don’t find it very useful. I used to faithfully watch “Meet the Press” and “Face the Nation” and other national news programs, but have given up on them. I learn way more from one episode of The Daily Show on Comedy Central than I did from a month’s worth of watching Washington pundits pontificating on one of the major networks. Some of the best news sources are small, little-known operations, and some of the finest journalists work for such outfits. The Wisconsin Center for Investigative Journalism and its wisconsinwatch.org website is outstanding. I’m a

big fan of Bruce Murphy at urbanmilwaukee.com. He’s really good. Jon Stewart and Stephen Colbert deserve to be included among the nation’s best newsmen. They are going to be tough to replace on those shows. As I write in the book, thank god for satire. The last safe harbor for truth.

Media Rants: During your time at the Wisconsin Democracy Campaign, your “Big Money Blog” was a lifeline for many activists seeking information and insight about how special interests rule our politics. Will you continue to blog or produce similar reports in some other format?

McCabe: Yes, I will start blogging again very soon. I can’t help myself.

Media Rants: You’re quite active on social media. How are Facebook and other social media changing the civic landscape?

McCabe: I have a love-hate relationship with social media. They are amazing tools, with vast potential to democratize the media. But they are still in their infancy, politically speaking. They also have a dark side, obviously.  Some of what you find on social media is mindless, some of it is disgusting, some of it is downright depressing. But on the whole, I think the good outweighs the bad. I find Facebook and Twitter and other social media platforms to be very valuable ways to reach people, exchange ideas and even inspire action. So I try to overlook what I hate about them.

Media Rants: Blue Jeans in High Places offers some pretty hard-hitting criticism of the political status quo, yet it’s also a very hopeful book. You seem optimistic that engaged citizens can repair our broken democracy. Why are you so optimistic? 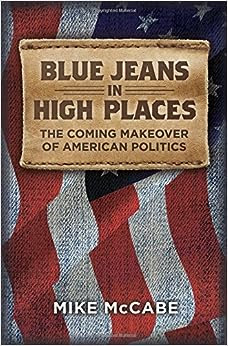 McCabe: The political system is broken, the major parties are failing us. There’s no whitewashing that. The current moment is bleak. But such conditions have existed before. And every time past generations encountered these same kinds of threats to democracy and civil society, they rose to the occasion and straightened things out. I refuse to believe that there is something fundamentally different about us or wrong with us that renders us less capable of making change than past generations were. We’ve reached a crucial turning point, just as our grandparents and great-grandparents and great-great-grandparents did. And I have no doubt that we will do what they did.

EVENT: Mike McCabe speaks on the topic of  “When Words Fail Us: Reimagining Political Vocabulary and Remaking Our Democracy”

Posted by tony palmeri at 5:15 PM No comments: