From the June 2016 edition of The SCENE

How much gun violence needs to occur in northeast Wisconsin before the mainstream media forces meaningful debate about the issue? Public officials openly sweep the matter under the rug, as in this statement from Governor Scott Walker after 18-year-old Jakob Wagner opened fire at Antigo High School and was then himself shot and killed by police:

"It's really trying to address everything from bullying, to mental health issues, to just how we deal with anger and aggression in society today. And, again, there's no one thing. There's not one easy solution. It appears to be a rifle, so unless people are going to ban hunting, which from even the most extreme I haven't heard much of that talk in the past, it's pretty clear that that route wouldn't be the answer.”

While waiting for the legislature and governor to “address everything,” recent history suggests we will continue to address nothing.

Lest you think the Jakob Wagner tragedy was unique in our region, let’s review other local gun events for which we are still waiting for Mr. Walker and his legislative minions to “address everything”:

*In September of 2013 two men openly carried AR-15 assault rifles to the Appleton Farmers Market for “self-defense.” Shortly after, a “cluck or duck” campaign showed the absurdity of the fact that a Wisconsin city can ban live chickens or other animals at special events, but not guns.

*In March of 2014 a gun was fired at UW Oshkosh Reeve Union during an evening social event. Thankfully no one was hurt.

*In May of 2015, 27-year-old Sergio Valencia del Toro killed Adam Bentdahl, Jonathan Stoffel, and Jonathan’s 11-year-old daughter Olivia on the Fox Cities Trestle Trail bridge. As with Jakob Wagner, del Toro displayed obvious warning signs to his family and acquaintances, but nothing that would prevent him from owning firearms.

*In October of 2015 a man was shot in a downtown Oshkosh parking lot; he survived but sustained serious injuries.

*In September of 2015, 31-year-old Samson Gomoll committed what prosecutors called “straight-up, cold-blooded murder” when he shot his girlfriend Stacey Strange at the couple’s apartment on West 10th Street in Oshkosh. Gomoll had multiple firearms in the apartment including an AK-47 assault rifle.

*In December of 2015, 46-year-old Brian Flatoff held hostages at gunpoint at the Eagles Nation Cycle Club in Neenah. The resulting chaos led to the police killing of the club’s owner Michael Funk. Attorney General Brad Schimel whitewashed Funk’s death, but a Post-Crescent editorial lambasted the so-called good guys with guns: “Something is broken in the Neenah Police Department. The department is dysfunctional. The leadership is absent.”

*In December of 2015, a man was shot outside of a business on the 700 block of Oregon St. in Oshkosh. The victim survived but the identity of the shooter remains unknown.

These northeast Wisconsin gun tragedies are not atypical; what’s chilling is just how typical they are. And it’s not just adults we are talking about. The internet rumor busting website snopes.com found this statement to be true: “Toddlers killed more Americans than terrorists in 2015.”

Why do we live like this? Or maybe the better question is why do we allow our citizens to die like this? From a media perspective, the short answer is that the establishment press is unable or unwilling to sustain a debate about gun rights and the Second Amendment that might last longer than an evening of local or cable news. A missing airplane or the latest Donald Trump inanity can get weeks or even months’ worth of obsessive reporting and commentary. Gun journalism appears mostly after a tragedy, but then usually to remind us why nothing can be done given the politics of the issue.

What would a sustained debate about how to handle gun violence look like? I think a great starting point would be the position taken by former US Supreme Court Justice John Paul Stevens in his 2014 book Six Amendments: How and Why We Should Change the Constitution. After presenting an exhaustive look at the history of the Second Amendment, Stevens demonstrates persuasively that the Amendment was designed to prevent the federal government from interfering with the power of each state to ensure that its militias were “well regulated,” and to protect the individual right of gun ownership for persons actually serving in a state militia. Stevens then suggests five extra words that can “fix” the Second Amendment (Stevens changes are in italics):

“A well regulated Militia, being necessary to the security of a free State, the right of the people to keep and bear Arms when serving in the Militia shall not be infringed.” 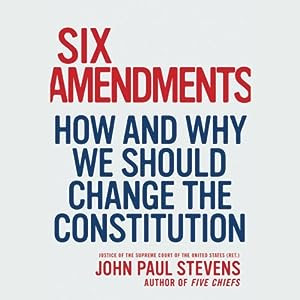 Many NRA members and others who continually obfuscate any meaningful gun discussion will insist that Stevens is wrong on his Second Amendment history. But what if he is right? The function of an ethical media (I realize “ethical media” is somewhat oxymoronic in our time) is to break through the obfuscation and provoke intelligent debate. If Stevens’ provocative suggestion could get more national media attention, candidates for state and federal office could continually be challenged to argue for or against it. That won’t solve our gun problem overnight, but it would at least put an end to the “gun debate free zone” that’s held sway for too long.

Posted by tony palmeri at 1:53 PM No comments: