Update July 25, 2019:  Mariano Rivera, the greatest relief pitcher in the history of major league baseball, recently became the first player ever unanimously elected to the Hall of Fame. Robert Silverman of the Daily Beast used the occasion to look more deeply into Rivera's politics, which he found to be on the far right side of the political spectrum, most notably in Mr. Rivera's stance toward Israel and his endorsement of the Trump Administration. Rivera has taken to the media to defend his relationship with the president.
The Media Rants column below was written in 2014, shortly after Rivera had retired from  baseball and released an autobiography called "The Closer." Given that Mariano Rivera was the last player allowed to wear #42 (major league baseball retired the number in honor of Jackie Robinson), at the time I thought it might be interesting to compare Rivera's autobiography with Robinson's ("I Never Had It Made). There is an aura of conservatism in Rivera's book, though it's more of a preachy Mike Pence style than a vulgar Trumpism.

I personally could care less what politicians Mariano Rivera (or any athlete) chooses to endorse. Athletes have the same rights as anyone to support, oppose, or be neutral toward anyone or anything. It is a bit ironic though that #42 Jackie Robinson reached the point where his frustration with America's racism made it impossible for him to stand for the national anthem, while #42 Mariano Rivera generations later endorses Donald Trump.

There is one scene in Mariano Rivera's autobiography that I hope someone reads to the president. It's a part of his story where he becomes successful with the Yankees to the point of being able to buy a nice house in Westchester County. The homeowner does not know who he is, and tries to rush Mariano and his wife Clara in and out as fast as possible, probably thinking that they are drug dealers. When she is told of his status, she changes her tone and wants them to sit down for pastries and coffee. In his telling of the story, Rivera recognizes that he and Clara had been racially profiled, but he is satisfied telling himself that the woman's behavior was a "rush to judgment . . . but no malice." What Rivera concludes from this experience is what should be told to Mr. Trump: "The Lord teaches us not to judge people by appearances, and not to close the door on anyone. We are all God's children, after all. It should not make any difference whether I work with a baseball or a machete, whether I am a fisherman's son or a New York Yankee." Part of the Trump brand is to judge people by their looks. He's told people of color he disagrees with to leave the country, and turned the Republicans into job shamers. The Los Angeles Times recently called him the country's "Bigot In Chief." One can only hope that Mariano Rivera uses whatever sway he might have with Mr. Trump to help him to recognize the error of his ways. Rivera is a preacher after all.

From the August, 2014 issue of The SCENE

The New York Yankees’ Mariano Rivera, the greatest relief pitcher in the history of American major league baseball, retired at the end of the 2013 season. When major league baseball retired Jackie Robinson’s #42 in 1997, players wearing the number at that time were given the option of keeping it until they left the game. Rivera retired as the last #42. Jackie Robinson’s widow Rachel believes Rivera wore the number well: “He carried himself with dignity and grace,  and that made carrying the number a tribute to Jack."

Rivera recently released an autobiography entitled The Closer. Deeply spiritual, the book could have easily been called The Gospel of Mariano Rivera.  In it we find a man for whom saving games pales in significance to saving souls: “For the last nineteen seasons, the Lord has blessed me with the opportunity to play baseball for the New York Yankees. My job was to save games, and I loved every part of it. Now I have a new job – probably better described as a calling – and that is to glorify the Lord and praise His name, and show the wonders that await those who seek Him and want to experience His grace and peace and mercy.”

Rivera and his wife Clara are the founders of Refugiode Esperanza (Refuge of Hope), an evangelical Christian Church in New Rochelle,NY. Housed in a historic building undergoing a $4-million facelift, the Rivera’s’ plan is for the church to be a “community hub that will include a food pantry, educational programs, tutoring, faith-based initiatives for kids and families, and more.” New Rochelle is an affluent suburb. Given that Rivera competed in the Bronx, in a stadium which has the dubious distinction of being located in one of the poorest and hungriest congressional districts in the nation, one wonders why Rivera didn’t get the calling to build the church there. But let us judge not lest we be judged.

With humble beginnings in Panama, Rivera understands poverty and racism. Yet The Closer studiously avoids controversy. Comparing himself to Jackie Robinson, Rivera writes, “I am no pioneer, I can tell you that . . . I am a simple man who measures his impact in a smaller way: by being a humble servant of the Lord, and trying to do my best to treat people – and play the game – in the right way.”

Jackie Robinson’s autobiography I Never Had It Made was released in 1972, shortly before his death from complications brought on by heart disease and diabetes. Most Americans know Robinson as the first African-American to break the color line in major league baseball. Less known is his political activism, which by the late 1960s had become militant in tone. In the preface he reflects on hearing the national anthem at his first world series: “As I write this twenty years later, I cannot stand and sing the anthem. I cannot salute the flag; I know that I am a black man in a white world.” In a chapter on Martin Luther King, Jr. he says that “there was a time when I deeply believed in America. I have become bitterly disillusioned.” 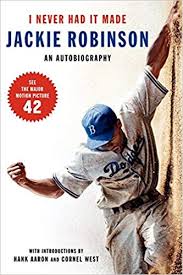 Robinson endorsed Richard Nixon against John Kennedy in 1960 (“I was fighting a last ditch battle to keep the Republicans from becoming completely white.”), but came to be disenchanted with both major political parties. Preaching a gospel rooted in social justice as opposed to Rivera’s rooted in personal salvation, Robinson argued that “we must develop an effective strategy and learn how to become enlightenedly selfish to protect black people when white people seem consolidated to destroy us.”

What would Jackie Robinson say about Mariano Rivera? A clue can be found in Robinson’s relationship with the Dodgers’ African-American catcher Roy Campanella. When Robinson fought to get black players the right to stay in air conditioned rooms at the Chase Hotel in St. Louis, Campanella did not join the fight because “I’m no crusader.” Though the two remained friends, Robinson made it clear throughout the book that he had little regard for people who stay silent in the presence of injustice. 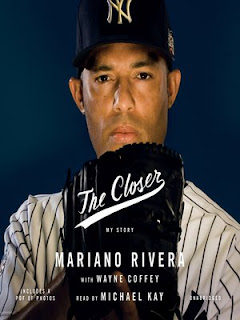 Rivera respectfully and admiringly praises Robinson for his courage in moving baseball out of the Jim Crow era. Unfortunately, he shows little awareness of the game’s modern injustices. One injustice concerns the gradual disappearance ofAfrican-Americans in baseball. In 1971 the Pittsburgh Pirates fielded the first all-minority starting lineup, and by the mid-1980s over 18 percent of major leaguers were African-American. Today, the number is down to around 7 percent (the lowest since the 1950s). For major league baseball executives and players to celebrate Jackie Robinson at the same time tolerating the steady decline of black participation in the sport is to make a mockery of his sacrifices.

Rivera like most modern major leaguers also has nothing to say about the “baseball academies” that exploit young athletes in Latin America. A 2013 Mother Jones feature exposed the terrible, sweatshop like conditions of the academies in the Dominican Republic. The death of the Washington Nationals’ teenage prospect Yewri Guillen in 2011 due to inadequate medical care should have provoked major reforms, but the deafening silence of players and the press makes change slow.

The 42 Gospel of Jackie Robinson would speak out about these abuses. Rivera should too.
Posted by tony palmeri at 6:10 PM No comments: