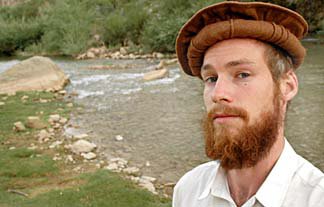 There's only one TONY Award this year, and it's kind of an "award of distinction." Colin Crowley's done much admirable work around the globe. Read:

If ‘tis noble to think globally and act locally, then how much nobler still to travel the globe and act in some of the world’s most troubled localities?

If ‘tis true that if you’re not part of the solution you’re part of the problem, then how extremely valuable is he who opens our eyes to problems we never knew existed?

Those questions come to mind when I think of Colin Crowley, the recipient of the 2010 TONY Award for excellence in local journalism. In prior TONY Award columns, “local” literally meant working in Wisconsin. Colin Crowley hails from Oshkosh, though he’s not lived here since taking off for Afghanistan in 2005 to work as a video documentarian for Shelter For Life, International (then headquartered in Oshkosh).

So why should someone who calls Nairobi, Kenya home receive the 2010 TONY Award?

To answer that question requires a candid assessment of the state of news media today. Largely irrelevant in the lives of too many people, news media frustrate the hell out of the shrinking numbers of folks that rely on it to meet civic and personal needs. Becoming “relevant” invariably means catering to the lowest common denominator while cutting the budgets necessary to cover seriously domestic and foreign policy stories that matter. The result is devastating for “small-d” democracy. This critique isn’t new, but argued most cogently in Bob McChesney’s classic Rich Media, Poor Democracy (University of Illinois Press, 1999).

Colin Crowley holds a set of humane, “big picture” values that role model what journalism, corporate and independent, national and local, could be like if it could find a way to escape from the clutches of profit motive and the resulting pandering and pettiness. Though he no longer calls northeast Wisconsin home, Colin’s got a thing or two to teach us locals about what 21st century journalism could be.

In 2005 Colin kept the “Colin’s Story” blog to keep followers up to date on his Afghanistan work. I lost touch with him until May of this year, when we exchanged emails. I learned that since April of 2008 he’s been employed with the British NGO Save the Children UK (STC) as a multimedia officer. In that role he creates photo essays, makes videos, writes case studies, serves as a chaperone for international journalists when they visit STC programs, and contributes international media pieces on humanitarian crises.

Since 2008 Colin's covered China’s earthquake, Myannmar’s cyclone, a war in the Congo, cholera outbreak in Zimbabwe, food crises in Ethiopia and Northeast Kenya, the catastrophe in South Sudan, and Haiti right after the earthquake. I last heard from him in July as he documented a food crisis in Niger that received scant coverage in the US.

Because it conflicted with the Olympics in South Africa occurring simultaneously, Niger’s food crisis almost disappeared from the global media radar. For Britain’s Sky News, Colin worked on some of the only interviews and video footage of the crisis. STC UK reported a large spike in donations from the British public in the 24 hours following the broadcast. Colin says that “it’s a good feeling to think that this kind of reporting can make a bit of a difference.”

Colin has become quite knowledgeable and articulate about the nature of the global food crisis. His analysis is hard to find in the mainstream press:

“I don't think Americans realize how inefficiently their taxes are used when it comes to food aid. I can't tell you how ridiculous it feels to be standing in a World Food Program warehouse in Zimbabwe, Sudan, Northeastern Kenya, and other places and see tons and tons of bags of grain that was grown in Nebraska, Iowa, etc., and costs billions of dollars to transport while people all around are starving and local farmers are sitting on empty stores for a lack of fertilizer, modern farming tools, seeds, or irrigation systems. It invariably brings to my mind a seemingly simple question: ‘Rather than paying farm subsidies and shipping companies billions of dollars to grow this grain in the US and then transport it to Africa, couldn't we take a fraction of that money and just invest it into local agriculture?’”

Colin advocates replacing the current food aid system with one that many NGOs now endorse: simply provide cash to people to support local market. This would inject needed dollars into local economies and be much less expensive than traditional food aid programs. The problem, according to Colin, “is that it would threaten farm subsidies and profits of shipping companies.”
The human catastrophes covered by Colin Crowley exist largely because of lack of awareness. Awareness leads to outrage. Outrage leads to collective action. Collective action leads to social justice. The great tragedy of modern media is in its failure, in some cases purposeful failure, to use its remarkable powers of creating awareness for the common good.

Lewis Hine was an Oshkosh son whose photojournalism helped end the scourge of child labor in the early 20th century United States. For bringing the humanitarian spirit of Lewis Hine to a global level, Colin Crowley is the recipient of the 2010 TONY Award. You can congratulate him by making a contribution to Save the Children. (http://www.savethechildren.org/).
Note: Past TONY Award recipients can be found here, here, here, here, here, here, here, and here.
Posted by tony palmeri at 9:30 AM No comments: