On September 22, 2011 I spoke at the Appleton Public Library on the topic of "Journalism in Hyperpartisan Times." I left the audience with a brief annotated bibliography of sources useful to me in preparing the presentation. Here it is:


Brief Annotated Bibliography
Anyone seeking to learn about the nature and role of modern journalism can find scores of insightful books, blogs, and other sources on the topic. Below I present a small sample of print and Web works that have directly influenced my thinking on the topic of “Journalism in Hyperpartisan Times.”

Books:
Rosen, Jay (2001). What Are Journalists For? Yale University Press.


A professor at New York University, Dr. Rosen writes extensively on journalism’s   relationship to citizenship. The book highlights the shortcomings of modern journalism, especially in relation to politics and civic culture, and suggests ways to fix matters.
McChesney, Robert (2000). RichMedia, Poor Democracy. The New Press.
Dr. McChesney argues that journalism in a democracy should serve three major roles: accounting of people in power, presenting diversity of opinion, and fact checking. In his book he explores the reasons why corporate media fail to fulfill those roles.
Putnam, Robert D. (2000). BowlingAlone: The Collapse and Revival of American Community. Simon & Schuster. (http://bowlingalone.com/)
Though not about journalism per se, Putnam’s important book demonstrates in dramatic fashion the breakdown of civic culture in the United States. An invigorated journalism is needed to help restore some sense of civic community.
Lueders, Bill (2010). Watchdog: 25 Years of Muckrakingand Rabblerousing. Jones Books.
One of the most valuable players in Wisconsin journalism for   many years, Bill Lueders is a       champion of freedom of information and transparency. He offers stinging critiques of all public officials who dare withhold information from the public.

Winner of a 2011 Pulitzer Prize for National Reporting (for a series of remarkable stories on the role of Wall St. bankers in worsening the financial crisis for their own gain), ProPublica’s mission is “To expose abuses of power and betrayals of the public trust by government, business, and other institutions, using the moral force of investigative journalism to spur reform through the sustained spotlighting of wrongdoing.”
Jay Rosen’s PressThink Blog (http://pressthink.org/)

Almost every one of professor Rosen’s posts sparks important, thoughtful debate on a range of topics, including the failure of “horse race” coverage of politics and the shortcomings of “he said, she said” journalism. A persistent theme of Rosen’s is that journalists should strive not to eliminate bias from their work, but to show good, sound judgment.
James Fallows (national correspondent for The Atlantic) (http://www.theatlantic.com/james-fallows/)

Mr. Fallows might be the best working journalist in America today. His writings are always well researched,  thoughtful, provocative, and always lead the reader to links that further substantiate his claims.
Wisconsin Center For Investigative Journalism (http://www.wisconsinwatch.org/)

Bruce Murphy is probably the finest journalist in the state of Wisconsin. He’s especially good at exposing lazy journalism as it is often practiced at wide circulation publications like the Milwaukee Journal-Sentinel.
Jim Romenesko’s Blog (http://www.poynter.org/category/latest-news/romenesko/)  (In 2012 Romenesko will launch http://jimromenesko.com/


Few deliver the “news about the news” as well as Romenesko. Though now in semi-retirement, he continues to produce an invaluable blog for anyone interested in the “inside” story of American journalism.
Posted by tony palmeri at 8:00 AM No comments:

[Note: The Appleton Public Library invited me to speak on the topic of "Journalism in Hyper-Partisan Times. The event will be held at the Library on Thursday, September 22 at 6:30 p.m. The September Media Rants column below is a preview of some of the comments I will make that evening. My main point is stated near the end of the Rant:"Great journalism isn’t nonpartisan. This is not to say that journalists should be partisan Democrats or partisan Republicans. Rather, journalists should be democracy partisans; news stories and opinion writing should be framed not to appease networks of power and influence, but to empower average citizens to participate in the never ending struggle to build a more just society." On the 22nd, I'll give examples of this kind of great journalism. It's rare, but it does exist--even sometimes in mainstream sources].

From the September 2011 edition of The SCENE

On Thursday, September 22nd at 6:30 p.m. I’ll speak at the Appleton Public Library on the subject of “Journalism in Hyper Partisan Times.” The event is free and open to all.

Are we living in “hyperpartisan” times? Scores of mainstream political voices insist yes, and they’re pretty hyper about it. President Obama repeatedly tells the nation that "The only thing holding us back right now is our politics."  Former California Democratic Congresswoman Jane Harman told Newsweek, “We’re playing a hyperpartisan game with real ammunition, and it’s too dangerous . . . we need candidates and leaders who prize the virtues of bipartisanship and solving problems over blame game politics.”

A bipartisan group of former elected officials along with business and academic leaders have heavy hearts about hyperpartisanship. In response they’ve formed the advocacy outfit “No Labels.” They argue (politely of course) “Hyper partisanship is one of the greatest domestic challenges our nation faces. . . Rather than focusing on solving problems, hyper partisans use labels to demonize their opponents, enforce orthodoxy within their own ranks, and marginalize sensible compromises.”

Warnings about hyperpartisanship aren’t new. Madison’s Federalist Paper #10 suggests the Constitution is designed to check the power of political parties. Washington’s 1796 Farewell Address spoke of the evils of “faction.” In 1881 former president Hayes attributed the assassination of his successor James Garfield to the “extreme and bitter partisanship which so largely prevails in our country.”

The modern critique of hyperpartisanship seems rooted in the belief that “extremists” on the Republican right and Democratic left resist compromise and prevent “sensible center” solutions to America’s problems. The extremists are magnified by shrill talk radio hosts, shadowy Think Tanks, and over the top cable commentators on Fox and MSNBC. 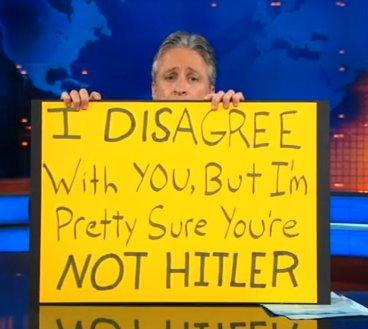 There are two major problems with the hyperpartisanship thesis. First, a false equivalency is drawn between positions labeled “extreme.” In the debate over how to reduce the national debt, we are supposed to believe that standing against cuts in Medicare is the same as opposing any tax increases, even simply ending millionaire loopholes. Somehow the sensible “centrist” position is a shared sacrifice model in which millions of middle class and poor people see reductions in Medicare and/or Social Security benefits while the super rich “sacrifice” a tax break.
Second, the hyperpartisanship thesis wrongly assumes that the dominant contest in American politics is Left v. Right. It’s not. As UW Madison labor scholar Joel Rogers, former Republican Party strategist KevinPhillips and others have argued, American politics is not left/right but top/down.(Notice how the "No Labels" video below uncritically accepts the left/right axis as the cause of our dysfunctional politics; solutions are "common sense" if we could only get over the left/right divide). Yes there are real and meaningful differences between the Republican and Democratic parties, but only willful ignorance can blind us to the fact that since the 1980s we’ve seen disturbing bipartisan agreement on a range of reverse Robin Hood initiatives (financial sector deregulation, global trade agreements, tax cuts for the rich, taxpayer bailouts of “too big to fail” industries, high tech sector subsidies, etc.) that have turned the world’s greatest democracy into a plutocrat’s paradise. And it’s not an exaggeration to say that absent mass grassroots action, the Supreme Court’s “Citizens United” decision will ensure elite control of our politics for many generations to come.

Unfortunately, almost all mainstream American journalism accepts and reinforces the hyperpartisanship thesis. Striving to be perceived as “nonpartisan” and “moderate,” political journalists believe they are doing their jobs properly if (a) their reporting marginalizes or keeps on the fringe all “extremist” perspectives and (b) the reporting upsets Democrats and Republicans equally.

The so called nonpartisan style pervades most press and broadcast coverage of politics. A typical example is New York Times reporter Matt Bai’s August 12th coverageof the Republican presidential candidate forum in Iowa. After correctly lambasting the candidates for pandering to base voters in claiming they would walk away from a hypothetical spending cut deal that required one dollar in new tax revenue for every 10 dollars of reductions, Bai then feels compelled to argue that Democratic candidates would pander just as badly. Bai says, “You could have put a lot of Washington Democrats up on that stage, and asked them if they would have accepted $10 in new taxes or new stimulus in exchange for $1 in cuts to Social Security, and you probably would have gotten much the same response: hell, no.” Those sentences add nothing to our understanding of Republican pandering in Iowa, but they do much to frame reporter Bai as “fair” inside the Washington beltway.

Great journalism isn’t nonpartisan. This is not to say that journalists should be partisan Democrats or partisan Republicans. Rather, journalists should be democracy partisans; news stories and opinion writing should be framed not to appease networks of power and influence, but to empower average citizens to participate in the never ending struggle to build a more just society.

New Washington Post Ombudsman Patrick Pexton wrote recently that journalistic populism might be the key to that paper’s survival. He says the Post should be “hard-hitting, scrappy and questioning; skeptical of all political figures and parties and beholden to no one. It has to be the rock ’em sock ’em organization that is passionate about the news. It needs to be less bloodless and take more risks when chasing the story and the truth.”

On September 22nd I’d love to hear what you think!