So Much For The Kagan Rationale 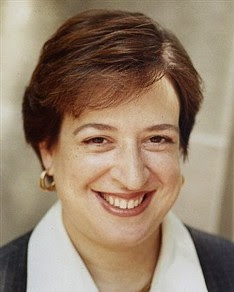 When President Obama nominated Elena Kagan to replace John Paul Stevens on the Supreme Court, the major rationale offered was that Kagan would be a "consensus builder" able to sway conservative justices (especially Anthony Kennedy) in a progressive or at least moderate direction.

What these numbers suggest is that Kagan, at least at this early point in her tenure, is a reliable liberal vote on the Court. There's very little evidence to suggest that, so far at least,  she holds sway with any of the conservative justices in any meaningful sense.

The crucial case testing Kagan's consensus building abilities was the recent one that gutted Arizona's public campaign finance law. Two elements of that case should be troubling for those hoping that Kagan will be the Court's consensus builder.

First, the 5 conservatives took a very, to put it charitably, "novel" approach to the First Amendment in holding that using public money to "level the playing field" in political campaigns; i.e. guaranteeing MORE SPEECH in the campaign, somehow places a "burden" on a privately financed candidate. If Kagan could not persuade a "moderate" like Justice Kennedy to see the fallacy in that kind of reasoning, it does not bode well for other cases that will come before the Court.

Second, in Kagan's career before her appointment to the Court she was somewhat of a First Amendment scholar. That she could not move ONE of the conservative justices in an area that is her expertise seems to suggest it's highly unlikely she will be able to do it in other areas.

During the Kagan confirmation period, Salon's Glenn Greenwald argued forcefully that if Obama was looking for a consensus builder who could sway conservatives, Diane Wood would be an excellent choice:

"Wood's ability to craft legal opinions to induce conservative judges to join her opinions is renowned, as is the respect she commands from them through unparalleled diligence and force of intellect."

In short, the results of her first term indicate that Elena Kagan will be a reliable liberal vote on the Supreme Court. Unfortunately, she was sold to the Congress and the American public as being able to do more than that. It's early and the jury is still out of course, but so far we have little evidence that Justice Kennedy is being moved by Kagan in any meaningful way.
Posted by tony palmeri at 11:02 AM No comments:

Media Rants: On Heckling vs. Techling

On Hecklers vs. Techlers
Media Rants

Controversial public communicators on the Left and Right can always count on the presence of hecklers in the immediate audience. The World English Dictionary says that to heckle is “to interrupt (a public speaker, performer, etc.) by comments, questions, or taunts.”

For some social movements, heckling of political opponents is a prime political strategy. Peace Movement and Tea Party activists share little common ground, yet wreaking havoc at events via often hysterical heckling is a modus operandi of both. Since corporate media doesn’t commonly cover events absent some kind of caustic clash, who can blame activists for acting up?

Some minimize heckling as merely a blatant form of uncivil behavior. I think that’s too simplistic. Sincere hecklers view themselves as blowing the façade off of tightly controlled, propaganda driven events designed to showcase establishment speakers in the most favorable possible light. Almost all Tea Party heckling matches that pattern, as does the recent heckling at a San Francisco fundraiser of Barack Obama by supporters of the President upset with the Administration’s treatment of Private Bradley Manning, the soldier accused of aiding Wikileaks.

Sometimes heckling is quiet and clever. When Scott Walker tried to score public relations points at the annual Governor’s Fishing Opener on Lake Wissota, he was met by boaters carrying signs protesting his assaults on worker rights. News coverage mentioned the actions and message of the protesters, effectively blowing the Governor’s portrayal of himself as an “average guy gone fishin’” out of the water.

Whether one views heckling as a legitimate part of democratic participation or as an obnoxious invasion of peaceful events, its effects pale in comparison to disruptions made possible by digital technology. Modern public communicators need not fear heckling as much as “techling.”

I define techling as the secretive use of digital recording technology to produce “gotcha” moments for partisan political purposes. The “techler” usually hides his true identity from the target, edits recordings to showcase the target in the worst possible light, then feeds the recording(s) to a corporate media all too ready to consume. The end result is the discrediting and sometimes total destruction of an organization or person.

Right wing provocateur James O’Keefe is the crown prince of techling, using deceptive communication practices to undermine the credibility of a variety of left leaning outfits. O’Keefe’s greatest “success” was sparking a media feeding frenzy that led to the dismantling of the Association of Community Organizations for Reform Now (ACORN), an advocacy organization for persons of low and moderate income. O’Keefe and a female friend posed as pimp and prostitute, and secretly videotaped ACORN employees giving advice on how to break tax and other laws. The videos were fed to right wing media and played endlessly, picked up by the mainstream press, and led to the suspension of federal funding for the organization along with the loss of much private funding. Though full investigations in multiple states found no wrongdoing, the organization dissolved in 2010 because, as stated on the group’s website, “vindication doesn’t pay the bills.”

A local example of techling involves the case of UW Oshkosh Criminal Justice Professor Stephen Richards. Last month Dr. Richards was chastised for encouraging students to sign a recall petition against Republican State Senator Randy Hopper. In the secret recording of the class period, Dr. Richards is heard making his views on the Budget Repair Bill crystal clear. Though the recording had been made available to Republican operatives several months earlier, the release came after enough signatures had been collected to move forward with the recall election and after former Oshkosh Deputy Mayor Jessica King announced that she would run for the seat.

Republicans anxious to shift the focus away from Hopper’s rubber stamping of the Governor’s Budget Repair Bill quickly called for Richards’ resignation. Richards will survive the techling, though the fate of provocative teaching is less clear. Back in the day, a teacher’s major concern when preparing a lecture was “will this material provoke my students to think?” In the age of techling, the question becomes, “how will this material sound on the Charlie Sykes show?”

The Richards Affair provides us with a case study in how techling and the techler differ from heckling and the heckler. Let’s summarize the differences:

The heckler wants to disrupt the speaker in real time. The techler studiously avoids disrupting the speaker in the hope that he will say something incriminating.

The heckler wants to call attention to him or herself and/or a message and tries to provoke the speaker to debate. The techler hides in the shadows, refrains from stating views and wants to avoid debate.

The heckler is usually an activist. After the heckling is done, she will usually talk to the press to offer clarification and expanded remarks. The techler is a tool; he funnels audiovisuals to an ideological outfit (e.g. Fox News, Breitbart) and lets the outfit do the talking.

In short, heckling is a consequence of democracy; an urge to challenge the establishment and add more views into the public arena. Techling appears to have more in common with Stalinism; an attempt to destroy political opponents and remove voices from the public arena by any means necessary.

Tony Palmeri (tony@tonypalmeri.com) is a Professor of Communication Studies at UW Oshkosh.
Copyright 2011 Tony Palmeri All rights reserved.
Posted by tony palmeri at 10:24 AM 1 comment: