Note: An audio version of this column can be found here.

My academic field is called Communication Studies. Scholars in the field identify and shed light on the many factors impacting human communication in any context, from face-to-face to social and mass media.

For many years Communication Studies went by the name Rhetoric. Rhetoric is still a major part of the field; modern rhetoricians examine the ways in which human beings influence each other through the sharing of symbols.

Back in the 1980s, Communication and Rhetoric teachers felt their heads exploding every time some partisan or pundit referred to President Ronald Reagan as the “Great Communicator.” I remember thinking, “how can someone be called a great communicator if he can’t offer coherent explanations of the policies of his own administration?”

In 1988 Dr. Kathleen Hall-Jamieson released Eloquence in an Electronic Age: The Transformation of Political Speechmaking, a seminal work that explained, among other things, how the medium of television created a requirement that political speeches be suitable for viewing in the living room. Like a prime time drama, the political speech should grip the audience with an engaging story line. Thus Hall-Jamieson’s explanation of the power of Reagan:

“Although his ideas are unoriginal, his language often pedestrian, the structure of his speeches at times haphazard, Reagan . . . is a skilled storyteller. Better than any modern president, Reagan understands the power of dramatic narrative to create an identity for an audience, to involve the audience, and to bond that audience to him. Like all good storytellers, Reagan understands the importance of invoking sentiments in the audience through use of vivid detail and delivered conviction.”

In 2016 Communication and Rhetoric teachers again find their heads exploding as some suggest that Donald Trump’s winning the Republican nomination  must have something to do with he too being a “great communicator.” Like Reagan before him, Trump understands “the importance of invoking sentiments in the audience through use of vivid detail and delivered conviction.” But while Reagan invoked sentiments in the manner of a father-like figure finding great moral principles in stories of everyday heroism, Trump is merely an irascible Internet troll. In late October the New York Times dedicated two full pages to publishing approximately 6,000 insults leveled by Mr. Trump against his political opponents. They called it “The 282 People, Places and Things Donald Trump Has Insulted on Twitter.”

I don’t think we need modern Communication or Rhetoric theories to explain rancorous trolls like Trump. Let’s instead go way back to the first century C.E. and look at the Institutio Oratoria of Marcus Fabius Quintilianus (I can imagine Trump tweeting “He has ‘anus’ in his name. Heh heh.”). Quintillian thought that the personal character of the orator was the most important element in the orator/audience relationship; he referred to the ethical orator as the “good man speaking well.”

Like all the early rhetoricians, Quintillian was under no illusion that people of character would necessarily prevail in public policy debates. Indeed, the good man speaking well is always in competition with the “bad man speaking poorly.” The bad man will bully, appeal to fear and prejudice, lie, threaten, mock, and manipulate. The bad man prevails in part when a society features high levels of what former Supreme Court justice David Souter in 2012 called “civic ignorance,” an inability to grasp the causes of societal problems coupled with a readiness to surrender freedom in order to allow some “strong man” to fix them.

Donald Trump, an incoherent blowhard sending out spiteful early morning tweets, is now the prototype of the 21st century bad man speaking poorly. Adam Gopnik’s piece in the New Yorker on the first Trump/Clinton debate and Trump’s morning after attack on a former Miss Universe crystallizes what we are getting at here. Of Trump Gopnik says:

“His cruelty to Alicia Machado was unleavened by any apparent respect for her as a human being in any role other than as an envelope of flesh—an attitude he only doubled down on the following morning by complaining that she presented what he saw as an obvious problem as a reigning Miss Universe: she had gained ‘a massive amount of weight’ (by Trump standards, that is). Again, this wasn’t a problem of how he chose to present his beliefs; the problem is with the beliefs. This wasn’t a question of preparation. It was that the things he actually believes are themselves repellent even when coherently presented. This was not a bad performance. This is a bad man.” (emphasis added). 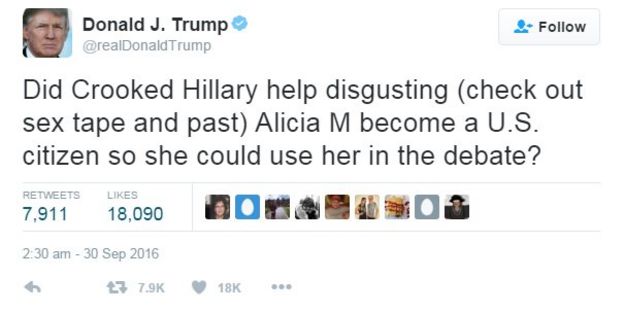 The Arizona Republic, a conservative newspaper in circulation since 1890, has NEVER endorsed a Democrat over a Republican for president until this year. Kudos to the editorialists for recognizing the perils of handing over power to an objectively bad man. Of Trump’s actions towards women, they write:


“They are evidence of deep character flaws. They are part of a pattern. Trump mocked a reporter’s physical handicap. Picked a fight with a Gold Star family. Insulted POWs. Suggested a Latino judge can’t be fair because of his heritage. Proposed banning Muslim immigration. Each of those comments show a stunning lack of human decency, empathy and respect."

Memo to Trump supporters: If your only response to the above is, “but Hillary Clinton is worse,” then with all due respect you just don’t get it.
Posted by tony palmeri at 4:09 PM No comments: