From the March 2016 edition of the SCENE

Like large numbers of Netflix subscribers, I binge watched Laura Ricciardi and Moira Demos’ “Making a Murderer.” Before watching the series, my knowledge of Steven Avery and Brendan Dassey was similar to most Wisconsinites: I knew that Avery spent 18 years in jail for a crime the Innocence Project proved he did not commit, got released with much fanfare and not too long afterwards was convicted of murdering young photographer Teresa Halbach. The evidence against the hapless Dassey never seemed as strong, but I remember in 2006 being convinced by prosecutor Ken Kratz’s media presentations that he was probably guilty beyond a reasonable doubt.

After watching the series I’m not quite ready to say that I think Avery/Dassey are innocent or even that enough reasonable doubt exists to warrant a new trial. But I am troubled by two things. First, in hindsight it is now clear that media coverage (especially television) of the Avery arrest and trial in 2006 and 2007 was awful. Second and more important, outrageous wrongful convictions are something that people of color in American have had to deal with for many generations. Why has there been so little public outrage at that fact?

On the awfulness of the media: some of the most cringe inducing scenes in “Making a Murderer” involve press conferences with prosecutor Ken Kratz. Most of the so-called journalists in the room come off as deer caught in headlights; they seemed unable or unwilling to press the prosecutor to support his statements. The most egregious example occurred on March 2, 2006 when Kratz held a press conference providing lurid details about how Ms. Halbach was brutally raped, stabbed, shot, and burned to death by Avery and Dassey. The press conference, which included charges for which Kratz did not have evidence  and were ultimately not what Avery was convicted of, succeeded in making it next to impossible to impanel a jury that did not already have an impression of the case. Because media outlets across the state chose to report Kratz’s comments, Avery’s attorneys saw no benefit to asking to move the trial out of Manitowoc County. 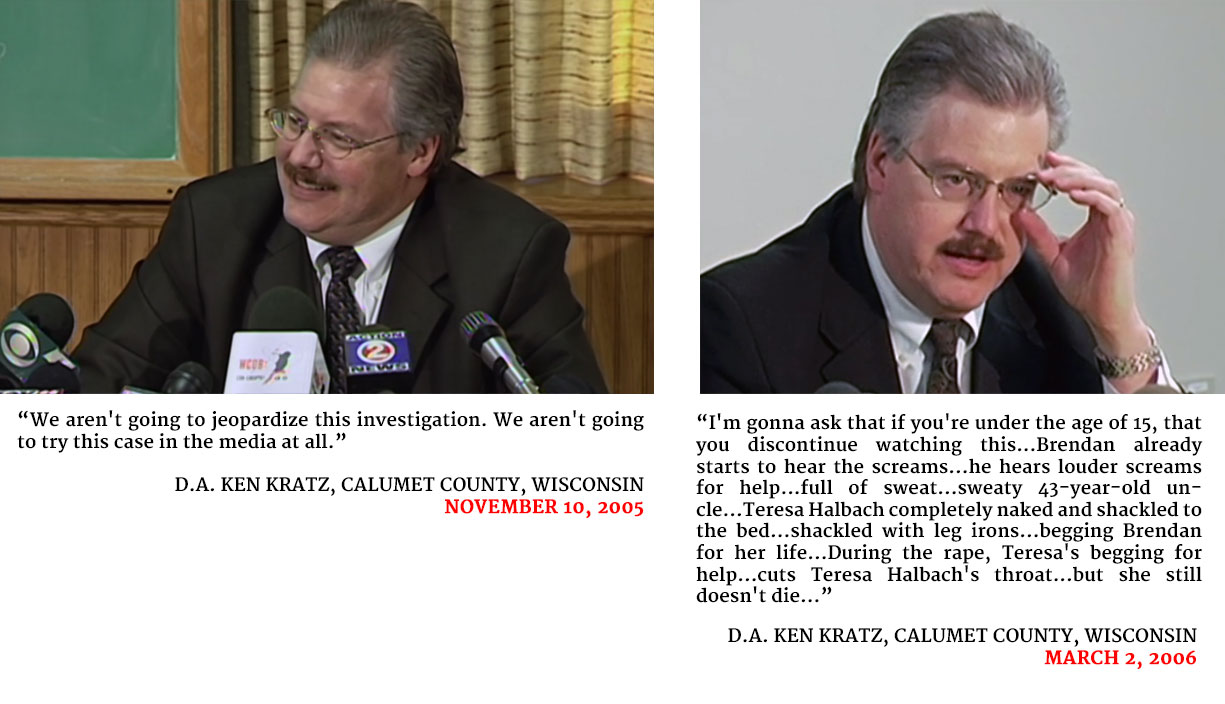 In fairness to the media, they could not have known in 2006 that Mr. Kratz would turn out to be a major league dirtbag. On the other hand, Journalism 101 should have taught them to be more inquisitive before becoming mouthpieces for the prosecution, especially given what we now know were highly questionable methods used to extract a confession from Dassey.

What about the lack of public outrage over wrongful convictions? Given the massive public outrage as regards Avery’s case (over a half million people signed an online petition asking President Obama to pardon him—something he has no power to do), you would think that wrongful convictions are rare. Not so. Reporting about the National Registry of Exonerations, the New York Times said that, “A record 149 people in the United States were found in 2015 to have been falsely convicted of a crime, and of those, nearly 4 in 10 were exonerated of murder . . . All told, its researchers have recorded 1,733 exonerations since 1989.” Five of the convicts exonerated in 2015 were facing death sentences, which should make even the most ardent pro death penalty advocates pause and reconsider their position. None of the exonerated individuals were the topics of documentaries, media sensationalism, or petition drives, yet the injustice against them was every bit as great as what happened to Avery for 18 years and what some believe is happening to him again.

African-Americans face the most blatant injustices in the system. According to criminal justice reporter Michael McLaughlin: “There's no way to know for sure, of course, but data about wrongful convictions show that blacks who are exonerated after a bogus conviction have served 12.68 years on average before the good news, according to Pamela Perez, professor of biostatistics at Loma Linda University. It takes just 9.4 years for whites and 7.87 for Latinos.”

White Americans sometimes get involved in efforts to raise awareness of the plight of African-American inmates falsely accused. Probably the best historic example was the case of Ruben “Hurricane” Carter, the boxer whose quest for freedom took off after a book and a Bob Dylan song raised public awareness. Mumia Abu Jamal and Assata Shakur have whites supporting them, but primarily in the activist community.

Would “Making a Murderer,”  and Steven Avery and Brendan Dassey, be getting so much open show of support if the parties accused were Black? The painful truth is probably not. Let’s close with a reworking of Paul McCartney and Stevie Wonder’s “Ebony and Ivory.”

Ebony and Avery covered differently on the ‘Net and TV
Google “National Registry of Exonerations” on my laptop keyboard, oh Lord, why don't we?

We all know that cable television is the same where ever you go
There is exploitable good and bad in everyone
But when the show’s about a white convict we learn to live, we learn to give each other
What we need to survive together alive

Ebony and Avery covered differently on the ‘Net and TV
Google “National Registry of Exonerations” on my laptop keyboard, oh Lord, why don't we?

Ebony, Avery covered differently on the ‘Net and TV

Posted by tony palmeri at 1:18 PM No comments: